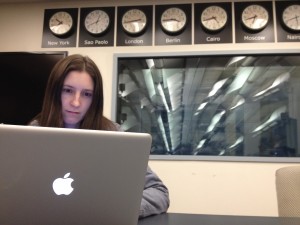 During the course of creating this website and reporting the stories, there were two big surprises for me. First, I knew I wanted to name this project “Invisible Labor,” but I started to think creatively about other titles assuming the domain name would already be taken. I was looking for a title that would serve as a good frame for workers’ stories without being too restrictive. For me, Invisible Labor was a strong title because it could include not just unpaid or low-paid jobs, but stories of workers that are overlooked, dismissed, or not acknowledged as New Yorkers rush through their day. One night, I was discussing how I would need another title with a graphic designer, and she asked the obvious question: “Did you see if the domain name is free?” So we searched the name, invisiblelabor.com, and to our shock it was available. I purchased it right away! But the ability to do so said a lot to me about how much more the media could be doing to report on labor, and it ended up heightening my interest in carrying out this project.

My second surprise came from reporting on the streets of New York City. For the photo portion of the site, I talked with people about the workers who contribute to their day. When asked if there was a stranger whose job helps make their day easier or brighter, some people responded immediately and some took a moment to come up with response. I expected that. What I didn’t expect was the response I received from a small number of people: “No one helps me. I make my own day.” These comments weren’t just people blowing off a reporter on the street. They took time to talk to me. I would question them more and hear comments so rooted in the notion of individualism that a sense of connection to other people was quickly discounted. This too confirmed for me the value in beginning this site.

← A Poem for Workers